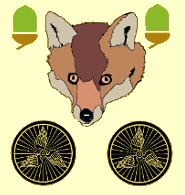 The East Midlands Cyclists' Touring Club Rally is held annually at Beaumanor Hall, during the Spring Bank Holiday. The campsite is open from 4 pm Friday afternoon to the bank holiday Monday afternoon. There are usually two rides organised each day from Saturday to Monday inclusive for those who do not want to do their own thing: one about 25 miles which is at a sedate pace and another of about 50 miles to places of local interest.

Some campers choose to devise their own rides or just relax.

The site facilities not only have the usual, toilets, showers and three sinks for dish washing, but also the use of a room with a table and chairs, a large larder fridge , a chest freezer, electric kettle and two electric toasters (one is for glutton free bread). The room is useful for charging mobile phones, sat navs, etc.

There are two drying rooms available which can be useful for those lightweight tourers who wish to wash their Lycra & get it dry over night!

There is a social on site during the Saturday evening at which a film is shown and nibbles, biscuits, tea and coffee are provided during the intermission.

The site is reasonable secure and the entrance gate is locked over night. The camp is ideal for cyclists with young families. There is a play area for young children, a small wooded area and large areas of grass to play ball and similar games (The grounds cover 34 acres).

The campsite is 0.8 miles from Quorn station, part of the Great Central Heritage Railway which operates between Loughborough and Leicester. There are several other close by attractions that can be cycled to, including Bradgate Park with its ruined manor house and large deer park. There is a relatively short and quiet route for cyclists into Loughborough from the site (see below).

There are many places to visit such as:

Ray Clay set up the event and managed it until 2014. The current manager is Ian Alexander.

There has been an estate at Woodhouse for seven centuries. Beaumanor was created as a hunting estate around the turn of the 13th century, since when three successive houses have stood on one site. In 1595 it was purchased by William Henrick, a London goldsmith, who enlarged the medieval house. Seven generations of Henricks lived at Beaumanor over the next 300 years. By the late 19th Century the family owned over 6000 acres in Leicestershire, stretching from Sileby to Whitwick and including most of the villages of Woodhouse and Woodhouse Eaves.

The Hall was one of the United Kingdom's most important wireless intercept (Y) Stations. Beaumanor Park was the home of the War Office ‘Y’ Group from 1941 until the end of the war in 1946. It is located in the heart of Charnwood, adjoining the village of Woodhouse (next to Woodhouse Eaves) situated between Loughborough and Leicester. It is now owned and maintained by Leicestershire County Council.

Quorn is the nearest place to pick up provisions on route or after a ride. There is also a byway that leads from the camp site to Loughborough. An easy 20minutes by bike.